NEWS: Read coverage of the Snoo Wilson Archive launch: Blog,  The Observer and The Stage

We are honoured to be the custodian of Snoo Wilson’s literary archive. Snoo read American Studies at UEA and was taught by the author and literary critic, Malcolm Bradbury. He graduated in 1969 and began his writing career in the same year.

SNOO WILSON was one of a handful of playwrights who reinvented British theatre in the 1970’s and 80’s. Together with Howard Brenton, David Hare and Tony Bicât he founded Portable Theatre Company, which presented his early work, including the still performed Pignight. His other plays include The Pleasure Principle, The Glad Hand (Royal Court), The Soul of a White Ant, Vampire, The Number of the Beast, More Light, Darwin's Flood (Bush Theatre), The Beast (RSC), Orpheus in the Underworld (ENO), Bedbug, a musical (with Gary Kemp & Guy Pratt) based on Mayakovsky’s 1929 satire (NT Connections 1995, 2016), and Reclining Nude with Black Stockings (Arcola Theatre). Following his sudden death in 2013, the many obituaries honouring both the man and the playwright confirmed that, at their exuberant, inventive and utterly original best, Snoo’s plays deserve their place in the country’s history of post-war playwriting. “He encouraged audiences to go on a rollercoaster ride into the beyond, albeit with engaging and recognisable characters. It was not whimsy. He was a one-off, quite unlike any other dramatist.” Dusty Hughes, The Guardian. His plays are published by Methuen and represented by Micheline Steinberg Associates info@steinplays.com

The archive contains extensive notebooks, diaries, manuscripts and working papers for his plays, dramatic sketches, film scripts, scrapbooks and photographs relating to productions. It includes correspondence from, amongst many others, Peggy Ramsey, Sir Peter Hall, Max Stafford-Clark, Richard Eyre, Terry Hands, Sir Trevor Nunn, Howard Brenton, Simon Callow, Simon Stokes, Dusty Hughes, Jenny Topper and Carmen Callil. There are also short stories, novel manuscripts and the unperformed and unpublished play, Revelations, ironically about an obituarist, which Wilson was working on before his sudden and untimely death in 2013. The material will play a crucial role in developing critical understanding of his life and work and represents a resource of major international significance.

Half of the archive was received in Summer 2015 and is now available to researchers - a second half was received in February and is being catalogued. Some glimpses can be seen in the slideshow below. 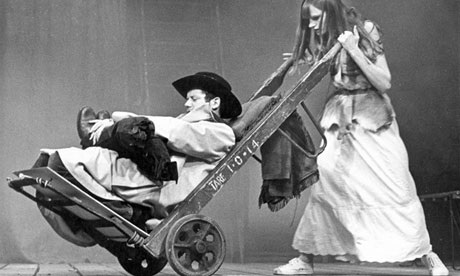 Snoo's widow, the journalist and academic Ann McFerran, blogs on the act of donating the archive.

Listing of this collection [pdf 1MB].

Tributes from Simon Callow and Steve Waters, are included below:

"It’s wonderful that Snoo’s work, which was constantly evolving, should be available to be studied. His originality and  scope were only grudgingly acknowledged by critics; with any luck a new generation of actors and designers and directors might as a result of the existence this archive give him another crack of the whip and reveal him for what he was: a pathfinder, a rulebreaker, a stargazer, a miner of deep and hilarious truths, a master of the universe. And a bloody good playwright." [The actor, writer and director, Simon Callow, 16 July 2015]

"Snoo's loss to the theatre is keenly felt given his work's astonishing formal ambition and variety - the fact of Snoo's having had his own links to UEA makes this location even more apt and helps extend our notion of UEA's literary legacy by setting the papers of a playwright alongside the works of novelists and poets.  Fascinating research possibilities arise from their presence - for aspirant dramatic and creative writers consulting drafts and reviews, as well as for theatre historians documenting the last forty years of British theatre practice." [The playwright and UEA academic, Steve Waters, 3 July 2015]

Obituaries from Simon Callow and Dusty Hughes are linked from his Website: http://www.snoowilson.co.uk/